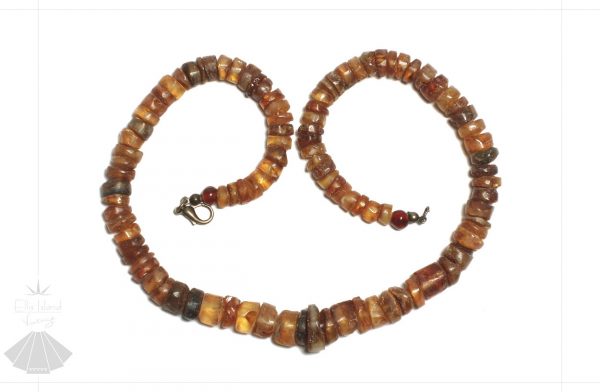 Origin: Former Russian Empire
Era: WWII era (circa 1930-1950)
Condition: very good; restrung on new thread; natural age and expected wear to beads; suitable for both wear and display
Measurements: 19″ long & weighs 28 grams
Additional Notes: This necklace was found in Lithuania, but such necklaces were worn throughout Ukraine, Russia, Poland, Belarus, and other Slavic countries as well as in the Baltic countries as part of the traditional folk costumes. The reference photos above show similar necklaces from western Polissya region of Ukraine. Amber was an important element of Slavic folklore and was worn for spiritual protection by women throughout eastern Europe. This natural amber is ancient, but the beads were likely fashioned in the mid-20th century and have been strung on new thread (natural hemp) with a vintage-style metal clasp. There are two red glass beads at the ends.