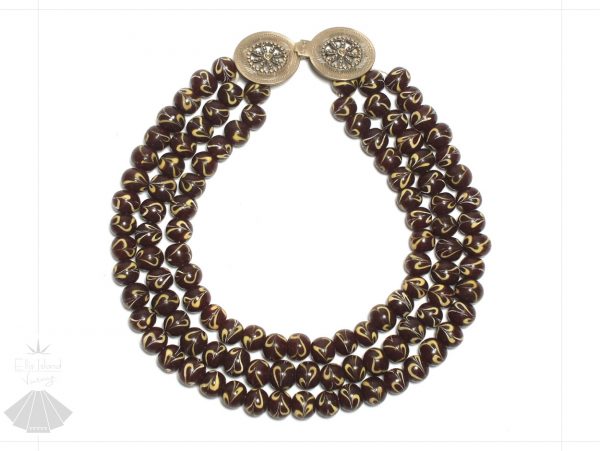 Origin: Ukraine | Hutsul region
Era: late-20th century (post 1990)
Condition: very good, like new condition; suitable for both wear and display
Measurements: shortest strand 14.5″ | longest strand 18.5″ not including clasp
Additional Notes: This is a contemporary reproduction based on historic Ukrainian necklaces made of Venetian glass beads. Such necklaces were worn primarily by the Hutsuls, but also in neighboring regions such as Pokuttya. This style became popular in the region at the end of the 19th century and story has it that the beads were originally brought back as gifts for the wives of Ukrainian laborers who had traveled to Italy for work. The beads became so popular among the peasant women that traveling merchants began supplying the region with the Venetian trade beads and a new fashion quickly developed. Unlike other jewelry, the fad did not spread far beyond this region and so it was isolated to a relatively limited area and most of the original necklaces are now in museums and private collections. This necklace is made from reproduction glass beads based on antique examples. The beads were custom made for this necklace and were handcrafted by a glass bead artisan. The clasp is also a modern handmade reproduction made in Ukraine based on an original. The photographs include images from a book showing original necklaces so that you can compare the quality. Often worn layered with other necklaces.