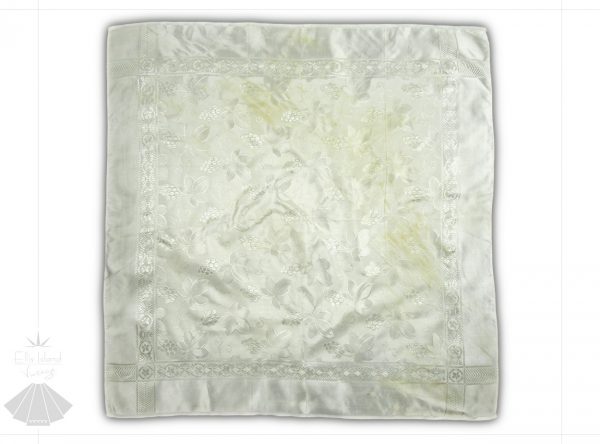 Origin: Eastern Europe | Slovakia
Era: WWII era (circa 1930-1950)
Condition: good; no holes; noticeable stains and marks from being folded and worn; due to the stains it is more suitable for display than wear
Measurements: 29″ x 29.5″
Additional Notes: Satin damask kerchiefs (commonly called brocade scarves) such as this were commercially woven in a wide range of colors and patterns and became especially popular in western and southern Slovakia as well as throughout Hungary. As these kerchiefs were mass produced, they made their way all over Europe and can also be seen in the folk costumes of Croatia, Italy, Poland, Germany, and France, among others. This particular example was collected in Slovakia. Depending on the type of light and how it hits, the kerchief varies in color slightly and the exact color is difficult to capture in photos. The last close-up image of the backside gives the best representation of the actual color of both sides.