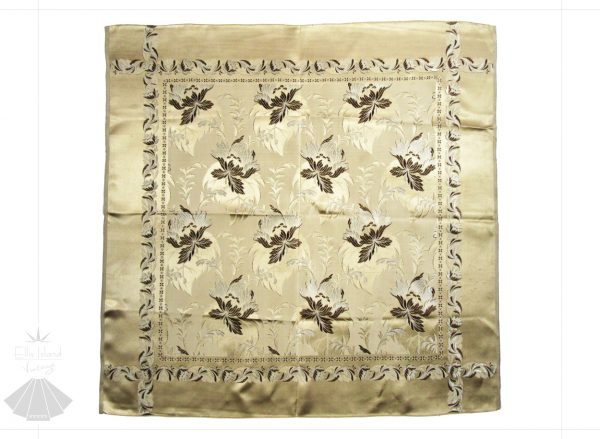 Origin: Slovakia
Era: WWII era (circa 1930-1950)
Condition: very good; minimal signs of use; couple small marks; no serious damages; suitable for both wear and display
Measurements: approximately 30″ x 30.5″
Additional Notes: These scarves were worn with traditional folk costumes in many countries including Slovakia, Poland, Czech Republic, Croatia, Hungary, Slovenia, Germany, Italy, Spain, France, and more. They were likely woven in different factories in Europe and sold at regional markets throughout the continent. This example was acquired in a village in Slovakia near the Czech border. The demand for brocade kerchiefs has grown exponentially over the past decade and they are now very hard to find. Their modern popularity in Europe is somewhat of a phenomenon and they are still used for folk costumes in Italy, Spain, France, Slovakia, and many other countries.