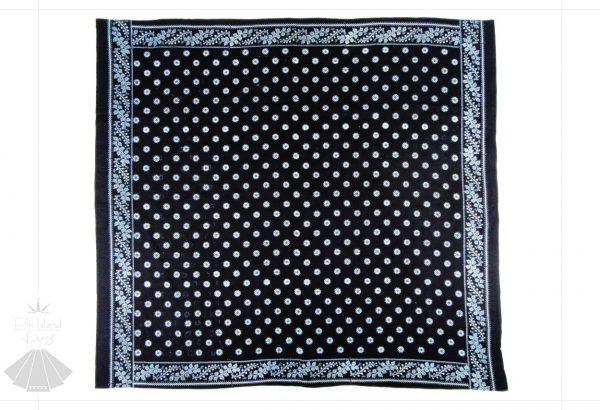 Origin: Slovakia | Spis region
Era: WWII era (circa 1930-1950)
Condition: very good; minimal wear; pattern transfer in one corner; suitable for both wear and display
Measurements: 45″ x 50″
Additional Notes: A phenomenal indigo-dyed, blueprint shawl from the Spis region in the Carpathian mountains. Once part of traditional clothing in hundreds of villages in northeastern Slovakia, southern Poland and the Carpatho-Rusyn parts of western Ukraine, these large handmade shawls went out of fashion early in the twentieth century. They were replaced by commercially available scarves that became very popular with peasant women in eastern Europe. Depending on the village and occasion these were worn either on the head or shoulders. The earliest examples were made of homespun linen that was woven at home and then taken to a dyer to be printed. Later, as for this example, cotton was used as it reduced the amount of manual labor required and allowed for lighter shawls. Designs could be selected at the workshop and there were dozens, sometimes hundreds of motifs to choose from for the border and field. The pattern was applied using resist-dye technique similar to Asian batik work. The design is the same on both sides of the fabric. Hemmed by hand along the side edges. Interestingly, similar shawls were also made and worn in other parts of Europe including Spain and Italy and nearly identical designs can be seen on historic images from these countries.