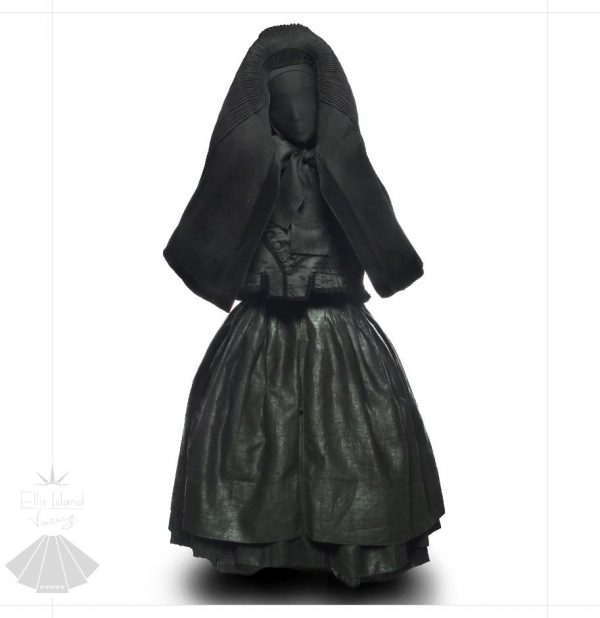 Origin: Germany | Hesse Region | Schwalm district
Era:
Early 20th century (circa 1910-1930) & WWII era (circa 1930-1950)
Includes: jacket, three skirts (two bottom skirts + one overskirt), apron, stockings, gloves, small cap with ribbons, bonnet, kerchief, and the “Trauermantel” (Mourning Cloak – special headdress worn during high mourning)
Condition: very good condition overall with signs of wear related to age and use; some holes and repairs in the apron; kerchief has a number of holes along the folds; one very small hole on the back of the jacket just under the collar; some stains on the stockings; bonnet is missing white tie string; suitable for both wear and display
Measurements (with garments laying flat): approximate woman’s size small-medium. Please contact us if you intend to wear the costume and would like specific measurements.
Additional Notes: The individual pieces date to various eras between the end of the 19th century and the mid-20th century as such clothing was passed down through the generations. As pieces became worn out they would be replaced with newer ones – especially such things as stockings and gloves that saw the most wear. This ensemble is particularly desirable due to its completeness with so many parts. Not all of the head pieces were worn together and the parts included here allow for several different variations as shown in the photos. The basic small cap with ribbons is always worn and the other elements are worn as required for a given situation. The small cap has a simple white flower embroidered on the top and has long black ribbons pinned to the sides that are tied in the front or back of the costume (depending on the occasion). The kerchief and bonnet are made from fine indigo dyed cloth (possibly linen) and have black embroidered initials. A point of interest is that the folds in these kerchiefs were never ironed out and the creases acted as an additional decorative element of the headdress. Over the years this often resulted in cracking along the folds and many have holes and repairs like the ones seen here. The most impressive element of head-wear is the Trauermantel that was worn during time of high mourning. It is made of pleated wool and rests atop the small cap so that the sides hang down and frame the face. This style of headdress went out of fashion earlier than other garments due to its peculiar design making is especially scarce and rarely on the market. The other elements are typical for the region and are all made of dark fabrics appropriate for mourning. The skirts are trimmed with black edging as opposed to colorful ribbon which would be worn on other occasions. The top overskirt and apron were always worn, but it would depend on the occasion if the woman wore none, one or both of the bottom skirts with it. When all three skirts were worn together with the apron the costume achieved the desired puffy shape characteristic of this region.