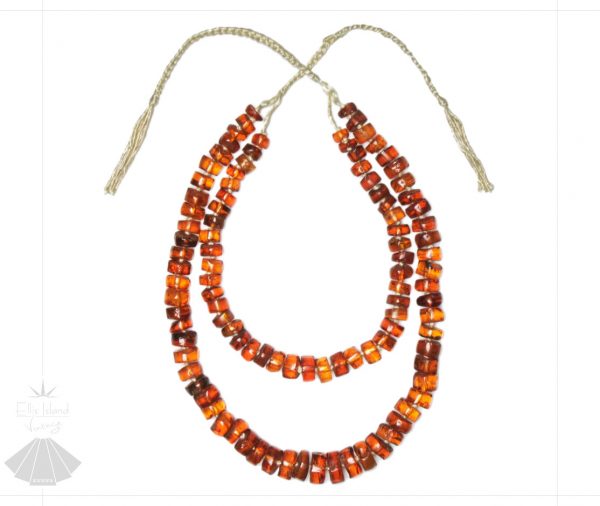 Origin: Ukraine
Era: WWII era (circa 1930-1950)
Condition: very good; restrung; natural variation, age and expected wear to beads; a couple chipped beads; suitable for both wear and display
Measurements: longer strand 24″ long | shorter strand 16″ long | approximately 40″ total length including ties | weight 162 grams
Additional Notes: A beautiful double strand amber necklace from Ukraine once part of a traditional folk costume. The size of the strands is indicative of central Ukrainian folk dress where numerous strands of large amber beads were common. Amber necklaces such as this were sold by traveling merchants and were popular throughout eastern Europe including Russia, Poland, Belarus, and other Slavic countries as well as in the Baltic countries as part of the traditional folk costumes. Amber was an important element of Slavic folklore and was worn for spiritual and physical protection by women throughout the region. The amber is completely natural and ancient with natural variation. The necklace has been restrung with knots between each bead and braided ties to adjust the length as necessary. The photos above include an image showing this necklace paired with other Ukrainian folk jewelry from our shop as an example of how it might have been originally worn.