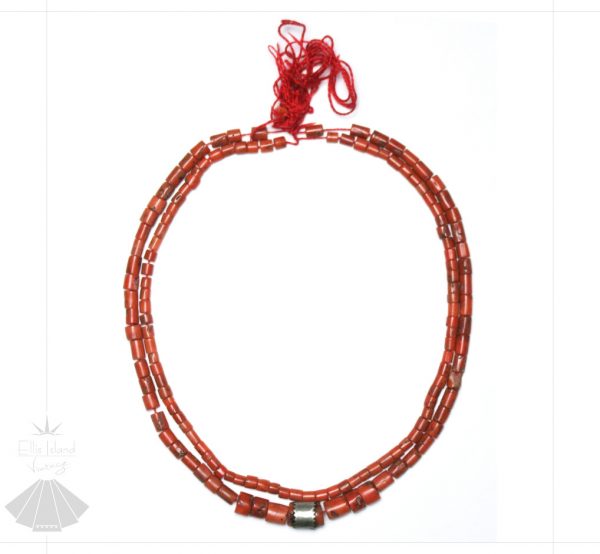 Origin: Ukraine or Poland
Era: 19th century (pre-1900)
Condition: good; chips and cracks to some beads; wear and natural aging consistent with age; suitable for both wear and display
Measurements: 20″ longest stand not including knotted string section | 56 grams total weight
Additional Notes: Traditional antique coral necklace from Poland, though the same style was worn across the modern border with Ukraine. Coral necklaces were worn throughout Ukraine, Russia, Poland, Belarus, and other Slavic countries as part of the traditional folk costumes and the size and amount was indicative of the wearer’s wealth. Red beads, especially natural coral, were popular in eastern Europe and were believed to have magical properties that kept them in constant demand up through the mid-20th century. Coral was always an expensive investment and not everyone could afford such an expense; however; it was considered to be such a necessary element of many regional costumes and a family would often sell off personal belongings (such as livestock) in order to provide coral jewelry for their daughter’s bridal dowry. This necklace is strung on the red thread, in the original condition in which it was found. You may wish to have it restrung on new thread if you plan to wear it (we can assist with this if requested). Otherwise, it can be left in the original condition as a historic artifact. There is a silver band around the largest bead.