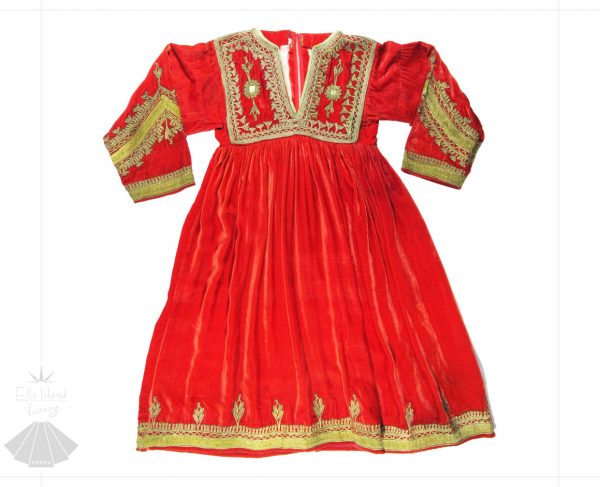 Origin: Afghanistan | Hazara ethnic group
Era: Mid-20th century (post 1950)
Condition: good; darker area on back left side below waist; faint dark staining on back right side below waist; suitable for both wear and display
Measurements (with garments laying flat):
Across shoulders: 17.5″ between shoulder seams
Across front: 16″ between underarms
Waist: 32″ around
Length: 43.5″
Additional Notes: This type of dress is often referred to as a Hazara dress and was worn by the Hazara women of central Afghanistan. It is said that the Hazaras began to incorporate goldwork into their garments in the 18th century following the Persian invasion where it was seen in the uniforms of the invading military. Afghans emigrants likely first arrived in America in the 1920s, though the great majority came in the last quarter of the 20th and beginning of the 21st century bringing with them their culture, art and traditional dress. While over 50 years old, this dress shows modern innovation with the later introduction of a zipper on the back. The rich reddish-orange velvet conceals much of the staining and makes it difficult to photograph, but there are a few darker areas on the back where the dress comes in contact with the ground or chair when sitting.