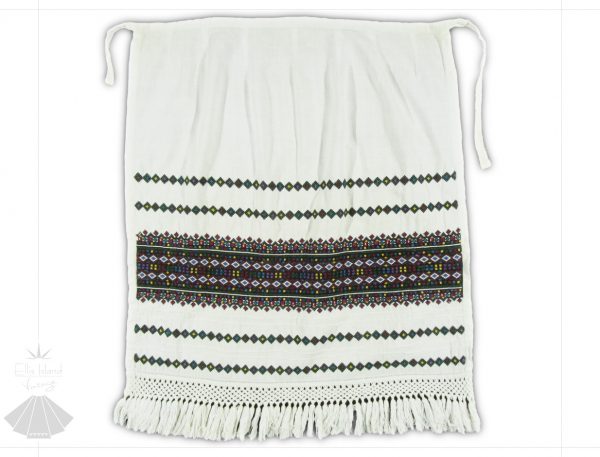 Origin: Ukraine | Lviv region
Era: Early 20th century (circa 1910-1930)
Condition: very good; couple very small spots; one tiny hole/snag; suitable for both wear and display
Measurements (with garments laying flat):
Width: 23.25″
Length: 25″ including fringe
Additional Notes: The city of Lviv played an important role in the preservation and popularization of folk dress in urban circles beginning at the end of the 19th century. Society women in Lviv took an interest in the peasant handicrafts of the region and worked to promote them through various events, exhibitions, and handcraft courses. A distinctive style of folk art developed here that reflected both traditional design and modern influences. This apron is an example of the Lviv style that that was worn as a part of numerous different folk costumes in the region. Made of cotton with intricate multicolored embroidery and lovely hand-tied fringe.