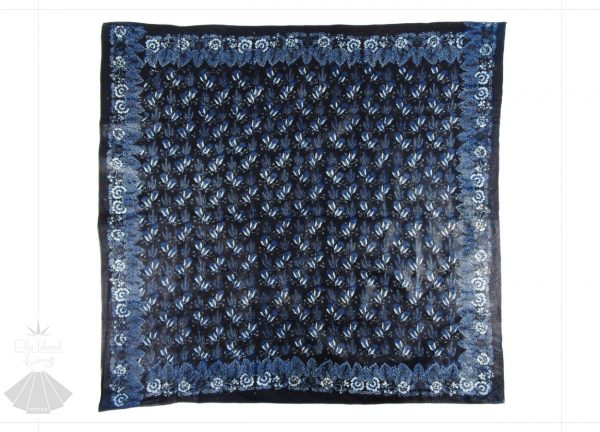 Origin: Slovakia | Spis region
Era: Early 20th century (circa 1910-1930)
Condition: very good; minimal wear; suitable for both wear and display
Measurements: 36.5″ x 37.5″
Additional Notes: A phenomenal two-sided, indigo-dyed, blueprint shawl from the Spis region in the Carpathian mountains. Once part of traditional clothing in hundreds of villages in northeastern Slovakia, southern Poland and the Carpatho-Rusyn parts of western Ukraine, these large handmade shawls went out of fashion early in the twentieth century. They were replaced by commercially available scarves that became very popular with peasant women in eastern Europe. Depending on the village and occasion these were worn either on the head or shoulders. Early examples such as this one were made of homespun linen that was woven at home and then taken to a dyer to be hand printed. The large size required joining two pieces of linen together as the full dimensions exceeded the loom width. Wood block designs could be selected at the workshop and there were dozens, sometimes hundreds of motifs to choose from for the border and field. Since the patterns were traditionally different on both sides of the fabric – as seen in this example – there was incredible variation in design and it was unlikely to encounter two identical ones. Extreme skill was required for keeping the designs clean and clear on both sides of the cloth and expert dyers passed down family recipes and secrets through the generations. This fine example was collected in a village near Poprad, Slovakia. Beautiful motifs and great sheen to the fabric. Very scarce and seldom seen outside of museums.