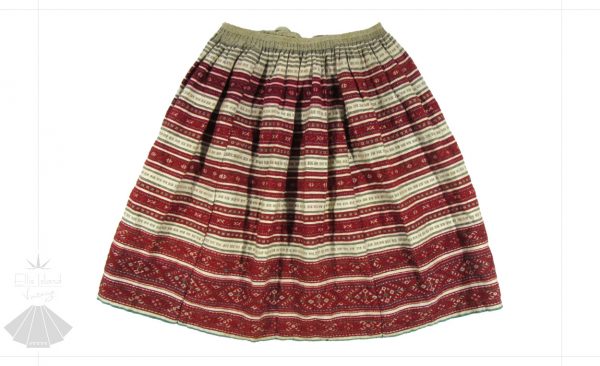 Origin: Belarus | Paliessie region | Malaryta area | Zamshany village
Era: Early 20th century (circa 1910-1930)
Condition: good; minor red fugitive dye and stains along red stripes near top of skirt; suitable for both wear and display
Measurements (with garments laying flat):
Waist: 28″ around
Length: 26″
Additional Notes: This style of striped skirt was once typical of the Paliessie region of Belarus with similar styles also existing across the border in Ukraine and Poland. Made of four loom widths of homespun wool and linen cloth, including a simpler panel on the front, which would have been covered be an apron. Elaborate handwoven skirts such as this were later replaced by simpler styles and original examples have become quite difficult to find. Belarusian costume in general is practically unknown in western collections due to the difficulty of accessing remote regions of the country where folk dress was still worn up through the end of the 20th century. This skirt was collected by an ethnographer in the village of Zamashy, later making its way to Russia and eventually to our shop in the United States. A scarce addition to any collection.