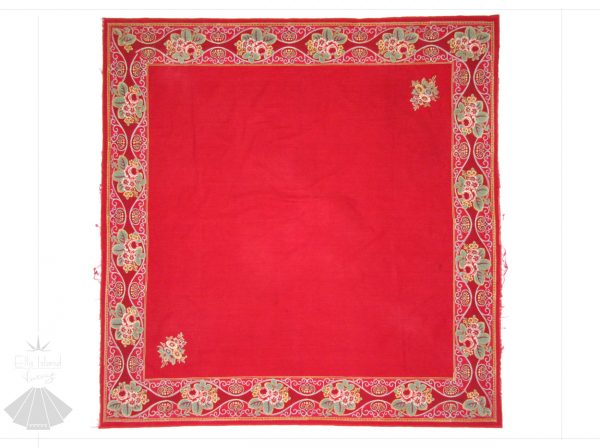 Origin: Czech Republic | Moravia
Era: Early 20th century (circa 1910-1930)
Condition: very good; small stains; fraying along unfinished edges; no holes or other serious damages; suitable for both wear and display
Measurements: approximately 55″ x 57″
Additional Notes: Such shawls were an important element of folk costumes in a number of countries throughout Europe and nearly identical examples could be found in distant corners of the continent. Based on documented examples, these appear to have been manufactured primarily in the Austrian part of the Austro-Hungarian Empire and then carried by traveling merchants to wherever there existed a demand for them. This example comes from Moravia where they were called “Turkish shawls” and were used for creating elaborately wrapped head coverings for women, akin to turbans. In other regions they were used as men’s accessories and even as banners in local folk customs. There is a fragment of the manufacturer’s name on one side, but it would take some work to reconstruct the cut off letters and trace the name. Modern examples continue to be made in the Czech Republic, but do not compare in quality to the old originals. Reference photo included above shows a girl from Hana wearing this type of shawl wrapped around her head in the local style.