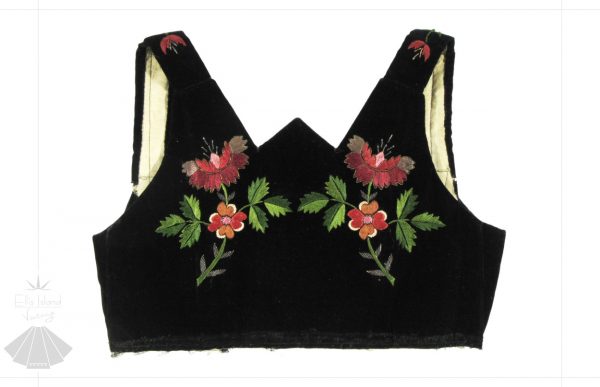 Origin: Czech Republic | Tesin
Era: Early 20th century (circa 1910-1930)
Condition: good; small stress tears around armholes and at back point; tarnish to metal embroidery; light general wear; suitable for both wear and display
Measurements (with garments laying flat):
Across front: 17″ with open front as shown in first photo
Length: 13″
Additional Notes: The town of Tesin (Czech)/Cieszyn (Polish) is split by the border between Poland and the Czech Republic. Once a unified region, the same folk costume was worn throughout this area on both sides of the modern border. Since this vest was acquired in an antique shop on the Czech side, it is listed here as Czech, but in reality there is no distinction between the garments worn across the border in Poland. Made of black velvet with hand embroidery on the front and back. Further embellished with metallic coil decorations and tiny glass beads. Likely from the 1920-30s era when floral embroidery motifs began to replace the earlier fully metallic designs. Originally attached to a long skirt with remnants of the original threads still visible along the bottom. The final photo shows a vintage Polish postcard with Cieszyn women wearing this type of vest with the full folk costume.