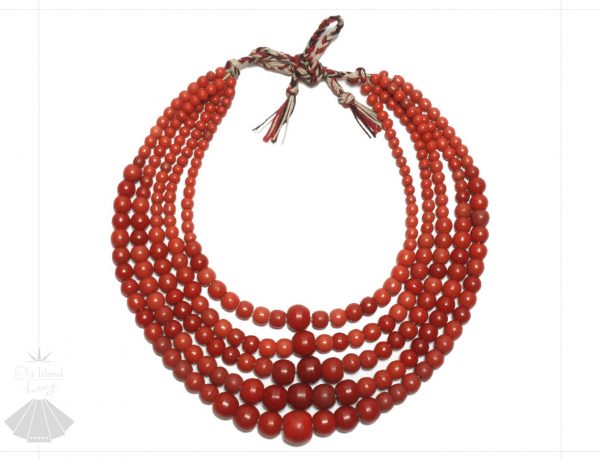 Origin: Ukrainian style necklace made from German Prosser beads
Era: Early 20th century (circa 1910-1930)
Condition: very good; beads are restrung on new thread; no chipped or broken beads; suitable for both wear and display
Measurements: The total length of the necklace including the tie strings is just over 30″. The longest strand measures approximately 19″ and the shortest is 11.5″ (beaded sections). Total weight = 160 grams
Additional Notes: Beautiful ethnic necklace from eastern Europe made of red glass Prosser beads. Such necklaces were worn in Ukraine, Russia, Poland, Belarus, and other Slavic countries as part of the traditional folk costumes. Red Prosser beads were popular in eastern Europe (as well as other places in the world) in the 19th and early 20th century as a more affordable alternative to natural coral and this necklace likely dates to that period. The reference photo included above shows women in central Ukraine wearing nearly identical necklaces. The necklace is restrung on new thread (natural hemp) and is ready for wear.